What is Birmingham’s colour? (A love letter to red brick)

When I started writing this article, the first thing that sprang to mind were the thousands of blogs already covering colour in creativity, meaning, and psychology, from ‘The Meaning of Colour’ to the ‘Psychological Properties of Colour’. I wasn’t keen to add to that existing pile.

So, I’ve been thinking about how it could be different, new, and, at the very least, an interesting read…

I moved away from the global colossus that is colour theory and thought a little more local. Can cities have a colour, and if so, what colour is Birmingham?

Can you decide the colour of an entire city?

Do we just ask the flat question of what colour do you think of when you think of your city? London stirs up visuals of grey – smoke, concrete, the murky Thames (can you tell London isn’t my favourite place?) – with the occasional flash of red from phone boxes and buses.

Or do we take our colour cues from the football teams in a city? Take a look at the ‘Second City Derby’ between Aston Villa and Birmingham City and their logos.

Claret and blue, or blue and white… Does one colour conjure up more passion? Does one colour influence better results from the team? It’s hard to say, but the colours alone do provoke pride.

Colour has the power to divide and connect

Colours mean a lot more to most people than you would think. Did you ever hear about the #BinGate fiasco in Liverpool?

Founded in another classic club rivalry between Liverpool F.C (red) and Everton F.C (blue), the council decided not to choose red bins in case it stirred up the two sides. Instead, they chose purple. It was immediately hated by many, and some even said that their street had been “molested by magenta”. It didn’t last long.

Nowadays, you can buy a miniature purple wheelie bin as a desk tidy from the Museum of Liverpool gift shops. They sold out within weeks of going on sale and the purple bin has become a badge of pride for Liverpool, with people finding a sense of togetherness in their new, colourful bins.

Although slightly on a tangent, this goes to show how a single colour can influence ambassadorship, instill disagreement and bring people together under a single symbol. Now thinking back to Birmingham… What would be the colour, would it be a single colour or a mix? Is it purely down to context and personal preference based on learnt experiences?

Let’s turn our eye to Birmingham…

Gathering visual items that have strong relationships with the city seemed to be a good place to start. From the history of the city’s Coat of Arms to the recently-inspired flag, we can see a vibrant mix of red, blue, and yellow. Strong primary colours. 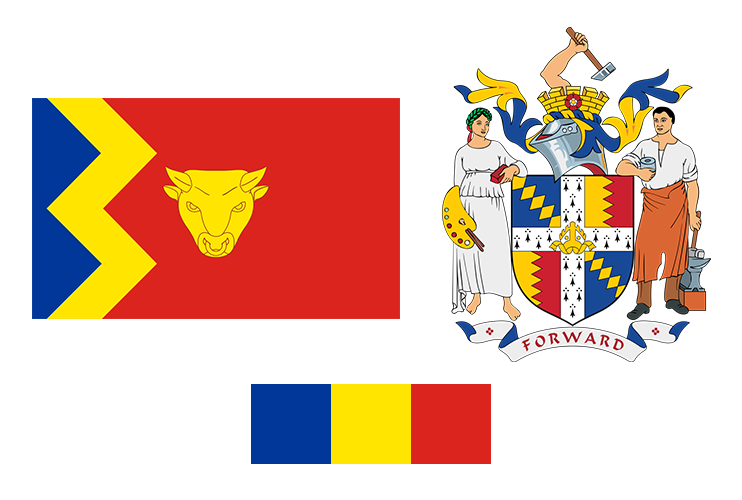 No wonder then, that the guys behind the Birmingham Design Festival branding took inspiration from the Coat of Arms, choosing blue to best represent the design community in the midland city. Find out about everything we learned there this year.

With most cities, their colours and associations often stem from a rich heritage in a certain trade and other significant turning points within history. For example, our Coat of Arms was created as an amalgamation of multiple families’ crests. This merger was the start of the city we know and love today.

The fond name of ‘City of a Thousand Trades’ seems more apt than ever when you know that this collection of designs and colours was chosen to represent the mix of trades and people in the city at that time (although admittedly this would have been skewed towards the tycoons and influencers of those days).

These early influencers have certainly made their mark, dictating the form of the buildings and architectural beauty of the city. If we take a look at the environment around us, what are the colours that are presented to us?

Birmingham keeps leaving us on red

For us in the JQ (Jewellery Quarter), the boldly beautiful terracotta reds and browns are first to mind. Even next to the modern buildings of glass and chrome, these old red buildings stand their ground. A prime example of this is the Springhill Library, standing tall even as the modern convenience of Tesco tries to knock it from its pedestal. 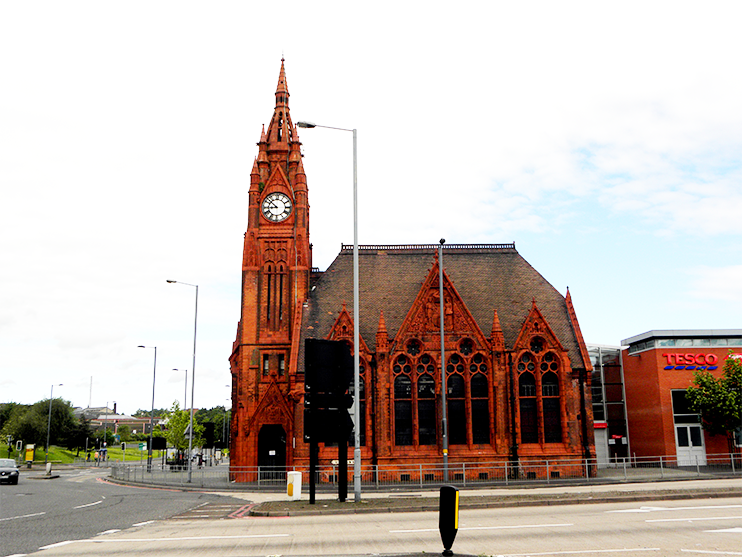 As you can almost feel from this image, this blend of reddish-brown evokes vigour, leadership, and stability.

The newly-reinvigorated ‘Kettleworks’ building is another great example of the weighted red standing its ground against change. It could just be a planning requirement, but I like to think that they kept the red brick due to a sense that altering the colour would somehow adjust its place in history. 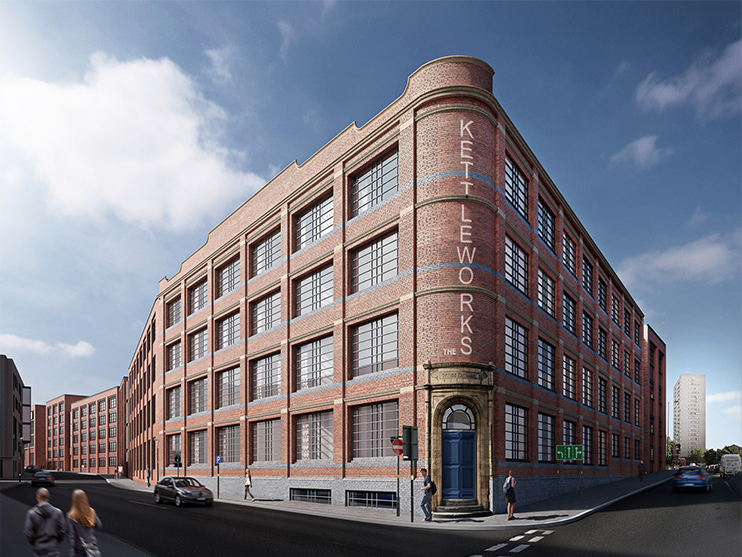 Our place for visual stimulus and graphic inspiration, The Ikon Gallery in Brindley Place, also has its reddened exterior, at stark contrast with the whitewashed walls inside. Or over at the Birmingham School of Art, where we attended the Birmingham Design festival back in June. As you walk by, the deep red seems to lean over you and remind you of its presence. 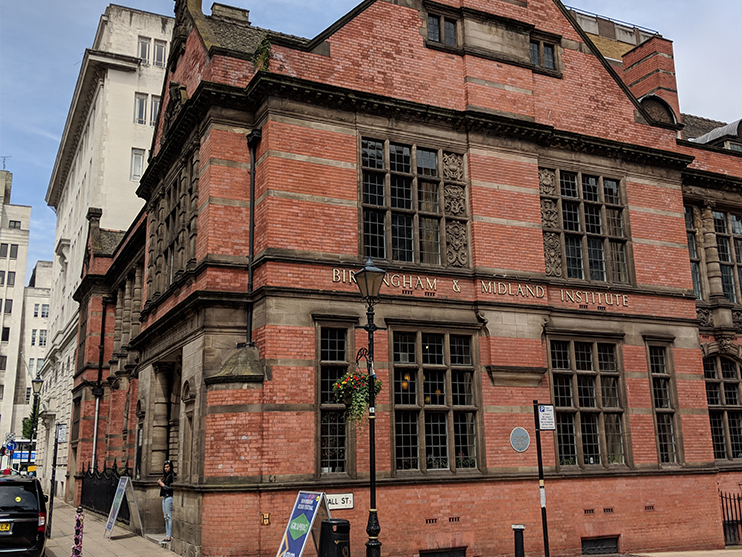 Even our friends at the University of Birmingham swim in the sea of red. 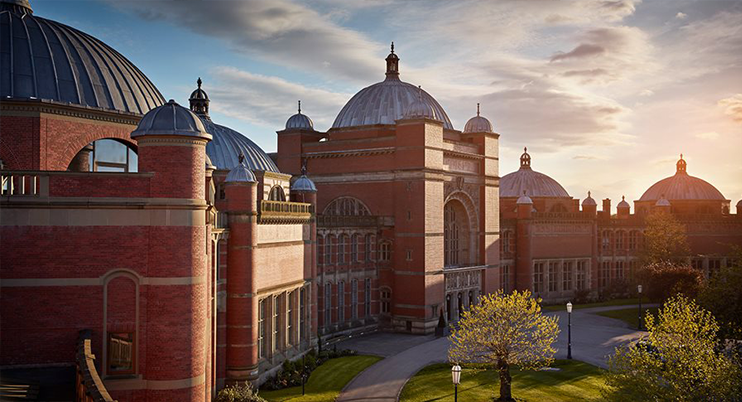 This vast expanse of buildings alone would dominate the space, but when you’re looking up at the towering ‘Old Joe’ clock tower, the naturally-assertive red is taken to the next level. And you’ll see this again in their logo, which was clearly influenced by the city’s Coat of Arms, showing that mix of red, blue, and yellow. 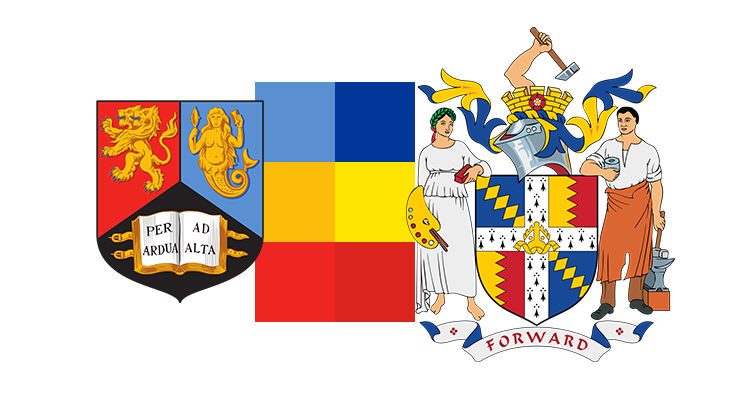 And there are just so many more, like The Victoria Law courts, the Methodist Central Hall, Bell Edison Telephone Building, and the Custard Factory. From the road, the red brick of the factory shines out, watching over the inner walls, now a vibrant arena for creatives.

Is everyone seeing red about our choice?

So, was the decision to ‘paint the town red’ a fully conscious colour choice? Or just a result of the practicalities of cheaper building materials from the Victorian era. Either way, can we deny the influence of that colour’s impact on the city’s industrious history?

Without a doubt, Birmingham is a city of fire, passion, strength, vigour, and courage.

Leaving us with this final question: Is Birmingham’s colour… red? 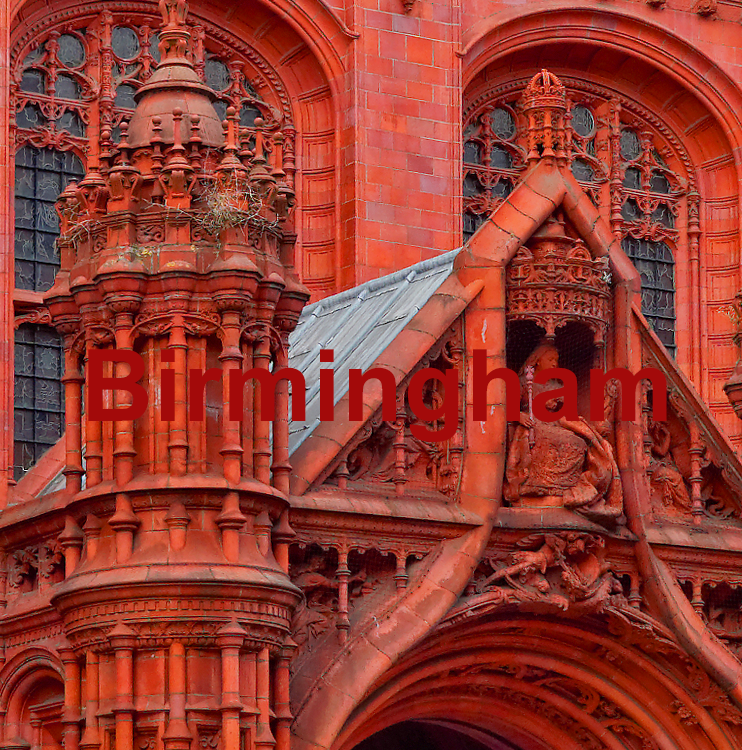